A Morning In An Amish Schoolhouse

I wasn't sure what to expect on Monday when we went on our own private visit to an Amish school.  Friends from church, Joe and Carol, are involved in a tourist place that take people to see the Amish and stop at some of their farms and businesses.  They are very good friends with many Amish families.  They set this up for us and I knew it was okay but I didn't want them to think we had come to gawk at them.  Joe told us that several parents would be in attendance - that they are wary since the Nickel Mines shooting.

My dad, a volunteer with his local fire department, was there that day, as roads were closed all around this location.  He had to check press credentials for the big trucks coming into the area from all the major news networks.  It was a day of enormous grief for all the Amish.  The volunteer fire company my dad is with is made up of about 40% Amish - he is well known in the community as either Captain Bob or Blinker Bob because of the flashing lights on his truck.

Because of all this I wanted to be very sensitive, also Tim was going to be late coming straight from work.

We arrived at the schoolhouse just before school was to start and the Amish children were shy but excited.  Amish children in Lancaster County speak only "Pennsylvania Dutch" a form of German until they enter school.  At school they learn English and then around 4th grade they also study German - which is used in their churches.

We were introduced and Joe explained that my children are home schooled, that they had never been in a classroom before!  The children's eyes got big at hearing that!

The parents arrived and school began with the teacher Anna Ruth reading from the New Testament.  Then they all stand and recite the Lord's Prayer.  After this, they all went up front and sang 4 songs for us - the students got to pick which songs they wanted to sing, and Anna Ruth sang with them.

Then came Math.  The assignments were on the board, but Anna Ruth also verbally told each grade what pages and problems in their books they were to do.

At this school they have 1st - 4th graders, 6th graders, a 7th grader and 2 8th graders.  For the 8th graders next Friday will mark their last day of formal education.  But they are well prepared to begin their apprenticeships, or to work at home, or in the family business.

Anna Ruth called the first grade and they stood by their desks - three little 6 year old girls with pinned up hair and full Amish smocks.  Adorable like three little flitting birds.  Teacher holds up flash cards and the one who answered first got to take steps toward the platform.  Once they were all on the platform she worked at the chalkboard with them on their 9 facts - 9+1=10 etc...then she worked with the flash cards some more with the three of them gathered around her - the one who got the answer first got the card and when they had all gone through the cards, they each counted their cards and the one with the most cards got to sit down.  They did this again with the two left and the one with the most cards this time sat down and the remaining girl did a few more cards then got to sit down.  They were eager little learners.

Anna Ruth did some other fun flash card drills with the 2nd graders too - the got to take big steps to her if they got the answer right and even got to go out the side door and in the back door until they got back to their seats!  The two boys and two girls in this grade had a lot of fun while reviewing their math facts.

Meanwhile the other children worked on their math at their desks and if they had a question, they held up a hand and Anna Ruth would call on them when she was able too.  Usually they needed something like sharpening a pencil etc...

Anna Ruth worked with all the grades, going over the problems that had been assigned.  With her 7th grade student their was a problem that Anna Ruth wasn't sure of either and she got the book and looked it up and showed her student how the problem was worked out.

I appreciated Anna Ruth's easiness with her students.  There was good order and discipline in the classroom, but not because she has a heavy hand with them.  Amish children learn young to obey, and there is no question that when they are at school they will obey the rules.  Anna Ruth never made a child feel foolish or stupid for not knowing an answer - if a child didn't know it and they had several attempts at it, she gave the question to the whole grade so the answer could be reinforced, then gave the child a new problem to answer.  She made sure they all had success.

After this the first grade girls did their reading - remember they are going from no English to speaking and reading English in this first year.  They all read aloud from their reader, taking turns with the teacher.  They did very well.

Then it was recess, a time to get a snack and play outside for a bit.  I went up to the teacher to thank her again for allowing us to visit.  I expressed my appreciation for the ideas she gave me for making rote memorization of math facts fun!  She was speaking with one of the Amish women who were there (I later found out it was her mother) and one of the men came up to join our conversation.  He asked me about what kind of curriculum I used with my children and we talked about that a bit.  Then he asked me where I was from.  I told him, then mentioned that my parents live in Kinzers, which was the next little town over.  Both the man and woman's interest peaked and they said "Kinzers!"  So I said "yes" and our friend Denny from behind me somewhere says "Maybe you know her dad "Blinker Bob", and I said "That is his nickname - he is with the Kinzer Fire Company" and the man says "Bob McElrath?!"  I say "yes" and he says "I know Bob very well.  Tell him you met JB"  to which I say "You're JB?  I've heard about you a lot!"  This man and my Dad are in the same fire company and are very good friends!  And he and his wife Lydia are the mother of Anna Ruth!

When they realized that I was the daughter of "Blinker Bob" all their reserve dropped away!  We were all 'family'.  We visited for a bit after this, I introduced Tim, who along with our tour guide friends had all come up to join the conversation along with the other set of Amish parents who were there.  They turned out to be JB's nephew and his wife - parents to some of the young students in the school.  They found out that Tim is a machinist for a printing company and mentioned that years ago a chief with the fire company used to work at a printing place and was able to get them the end rolls of paper that was left over.  We nodded and Tim mentioned that he could get them paper too, as this paper ends up being recycled anyway.  They were delighted as Anna Ruth had used up the last of their rolls of paper in her class room this year!

We are excited to make this connection and to keep up acquaintances.  We hated to leave.

The rest of the day was great too, we went to the Amish Experience and had a tour and watched a really good multimedia presentation about a young man who must decide if he is going to be baptized and join the church or not.  It was very well done.

I did not take one photo, but the memories of that day will stay with me forever.

Let's Talk About Some Good News

I read an article this morning that said that the State of New York discharged more patients who had recovered from Covid-19 than they admi... 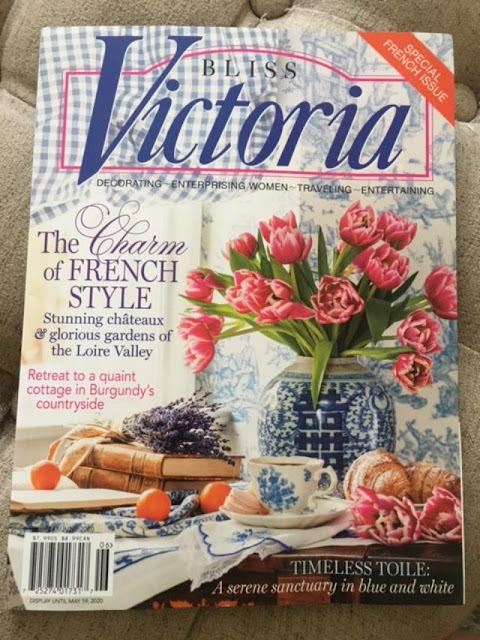