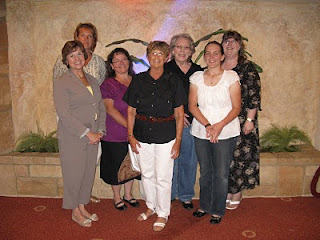 Thanks Warren, for taking our photo!
What an awesome time we had yesterday!
Becky over at Hospitality Lane made tickets available to see Joseph at Sight and Sound Theatres!  I didn't think it would work for me to go...Lindsay was already going, Emily had to work, Tim wouldn't be home in time for me to leave, and we are headed out for a quick trip north in just a few days!
Well, everything came together for me to go...God sent a huge rain storm yesterday that caused Emily's work to close, and I picked her up while I was still out doing many errands.  Tim had already planned to take Emily and the little ones to a Christian music night rollerblading event that happens every week...Anyway, to make a long story short - I got to go!
I kept hearing how amazing the show was and how "you've got to see it", so I had pretty high expectations.
It was fabulous!  I mean it.  You may recall that the girls, my Mom and I had a night out in June to see 'Phantom' at the Fulton Opera House.  You can read about that here.
Joseph is head and shoulders above the other show.  The music is fantastic, the acting is great, the sets and staging are amazing!  Since I sew I love to look at the costumes...so wonderful.  The technology in this show is neat.  At one point the set changes from the prison dungeon to Pharaoh's palace and on the wall they show Pharaoh's dream...it is a great way to tell the story.  The other amazing scene was the celebration at Potipher's home with the performance of showing the glories of Egypt.  That was Awesome!


A scene near the end of the show had me in tears as Joseph sees his father Jacob after all those many years, and he tells him with tears "I kept my name Father, I kept my name."  Joseph's name means "May Jehovah add/increase."  That is what happened to Joseph.  He kept trusting God - he held to the truth that the Lord is in control and had a plan.  Oh, yes, he had to fight being bitter against his brothers, keeping him from his father and younger brother Benjamin, but Joseph recognized that God planned his life to place him in Egypt at that moment in time, in order to preserve the family line. It is so powerful, to watch God's hand at work!
After the show we found out that the actor playing the Joseph was not the lead or the understudy, but the third guy in line!  He did an amazing job!  Having never seen the show I didn't realize he wasn't the lead actor!
Can you tell I LOVED the show?  It really is the best show I have ever seen there, and one of the best shows I have seen anywhere!
If you get the opportunity to come to Lancaster County or even near by, I hope you will go and see Joseph.
at July 15, 2010

some of the petals from my roses How was your weekend? Ours was quiet. Tim and I ran an errand together on Saturday that required a bit of... 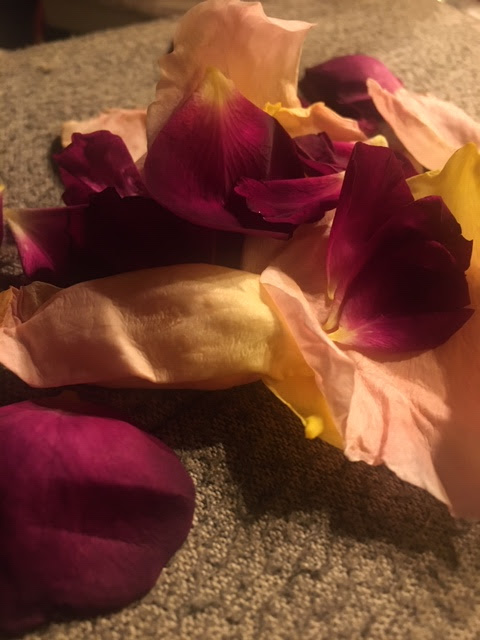