The Season Of Joy Has Begun 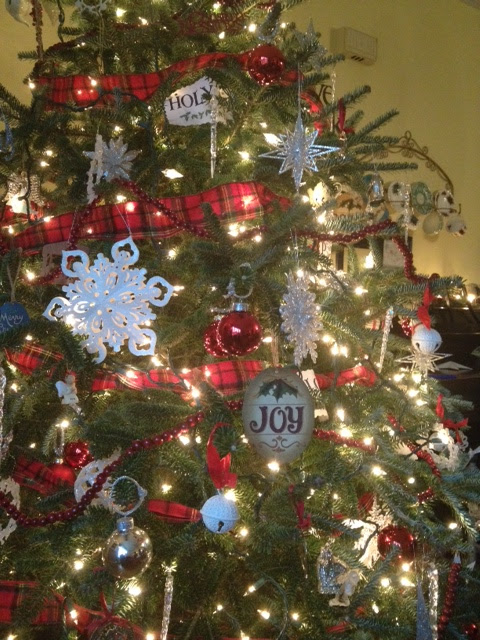 Last bit of preparation before the Tea In The Highlands event at my church.  I'll be sure to take photos and show you on Tuesday!
at November 29, 2015 4 comments:

Thanksgiving was a day of family gathered around our table. 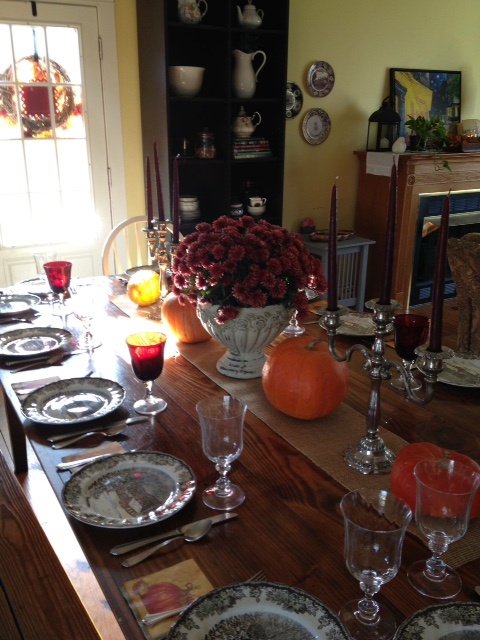 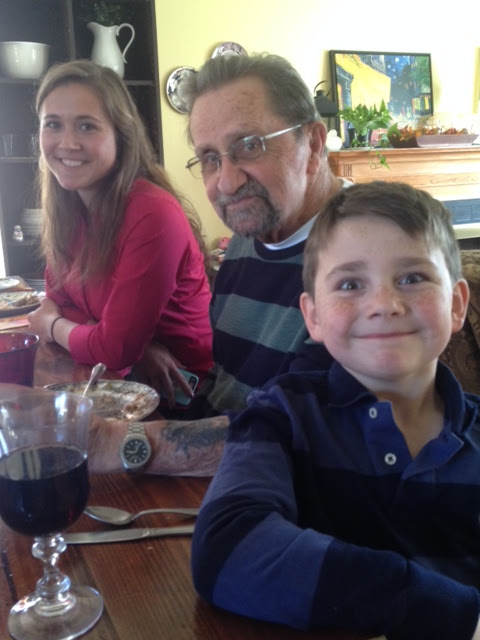 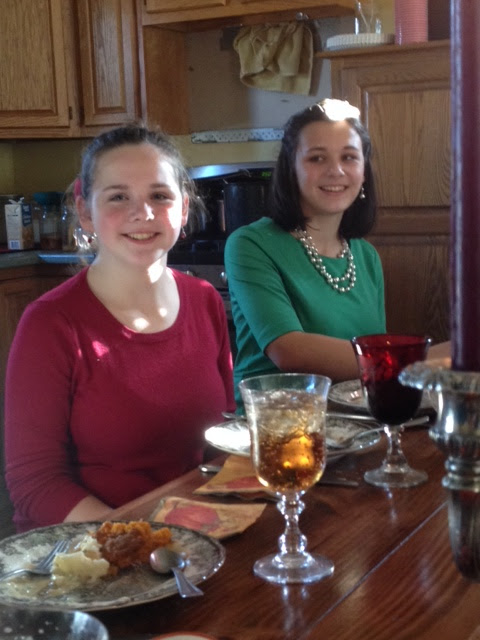 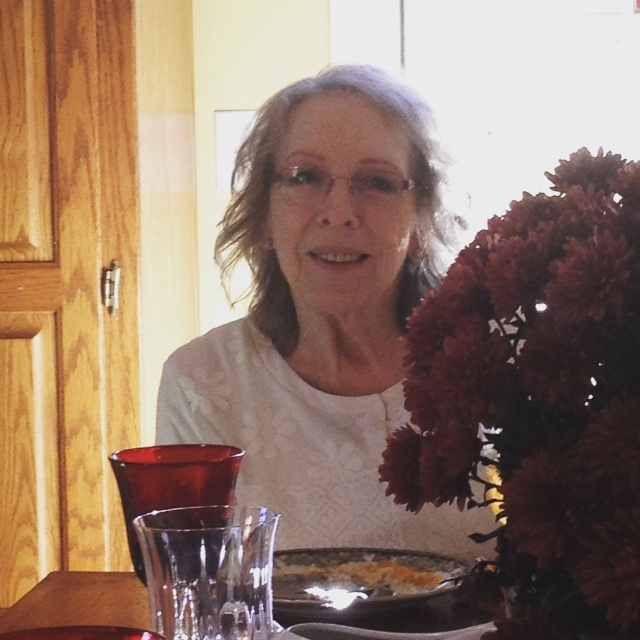 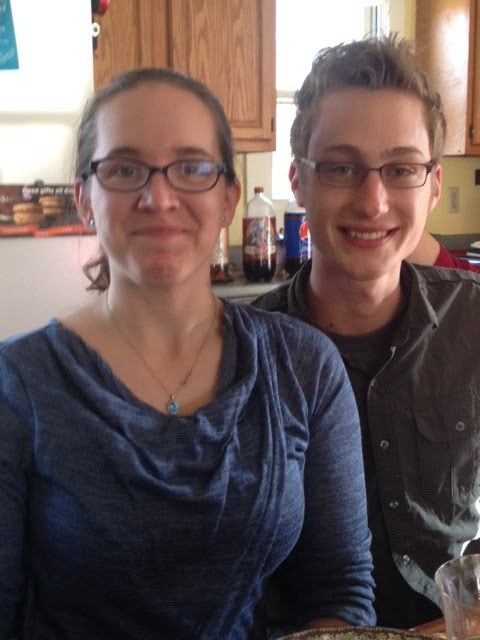 With married kids we know that we will have to share the holidays.  Last year Lindsay and Joseph were with his family.  This year we get them! 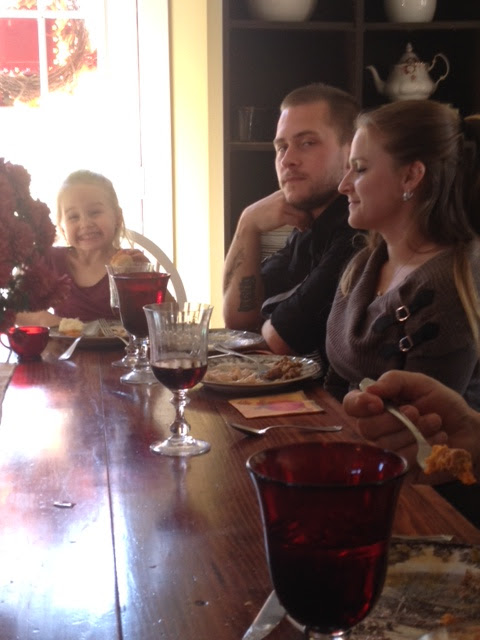 We ate great food, enjoyed being together, played games, watch movies, looked at old family photos my parents had brought with them. 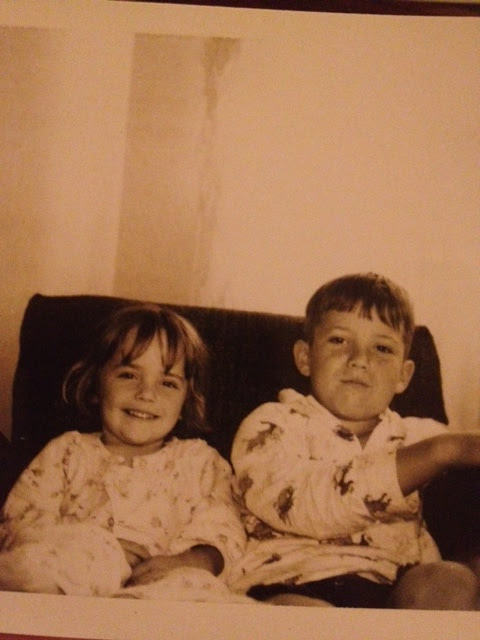 Here is a photo of my brother and I in our jammies.

I hope you had a good day too.  Today, I'll be begin the process of greening the house, and getting the focus on celebrating Advent and Christmas.

I'm thankful that people who were being persecuted for their religious beliefs, packed into a small ship with their children and headed for a place they hoped would allow them to worship the way they believed would honor God.

They left 'modern' life behind for the unknown.  They suffered the death of half of their party that first winter.  But they saw themselves as stepping stones for the next generation and the next.

Were they perfect people?  No.  Were they all separatists?  No.  But they found a way to work together, and even learned from the Indians, how to survive.

They had a vision of building a community and perhaps a nation.  I often wonder if I would have had the strength to face the dangers they did.

I hope you have a wonderful day.  Even in these challenging times, there are things to be Thankful for, and to remember the Source of all goodness and blessing.

Email ThisBlogThis!Share to TwitterShare to FacebookShare to Pinterest
Labels: Thanksgiving

I'm Awfully Fond Of My Chickens 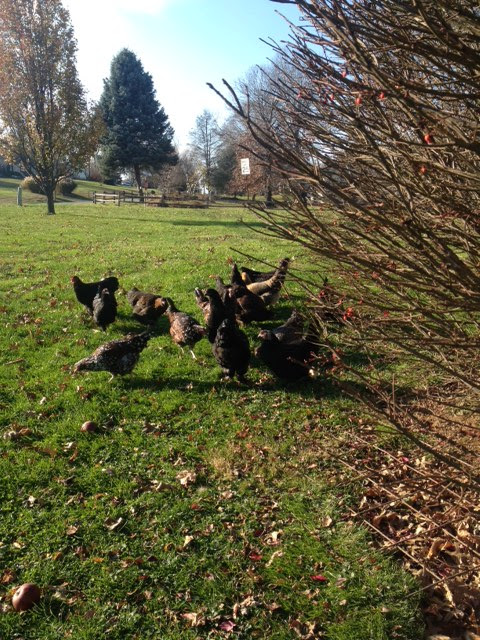 I let our chickens out early yesterday.  With our old batch of hens (only two of which are still living, out of 9.  We had a hawk who thought this was a drive thru restaurant this summer) we let them free range all day. Now they go out later in the day, and they've been fine.  We also didn't let them out at all for several months so that the hawk would realize that he would be getting no more meals here.  They live in the old dog run which has chain link on the top also.  Did I tell you one Sunday morning, we came out of the house to go to church and the hawk was sitting on top of the dog run looking down at the chickens?!!! 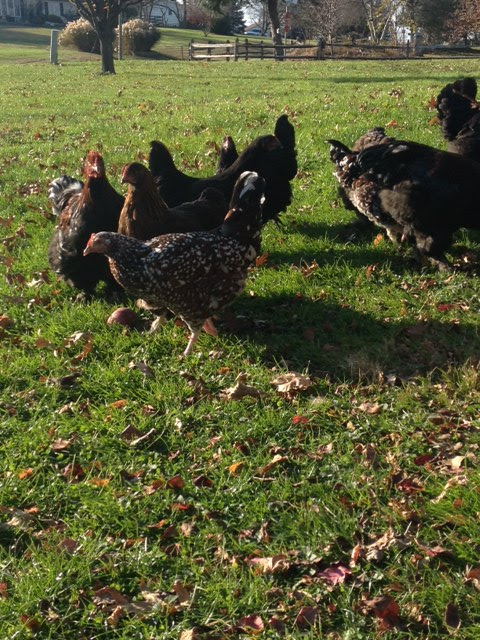 I understand nature and the circle of life, and I'm fine with that, but he's had enough of my hens, I'm not sharing any more. 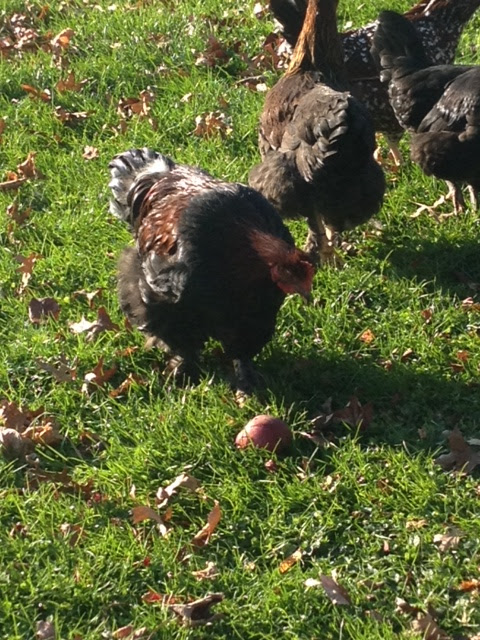 These chickens love apples.  We have Australorps, Pidgeon Cochins, Speckled Sussex, Marans, and another older girl whose breed escapes me now.  We didn't by the Pidgeon Cochins sexed, hoping we'd get one or two roosters, and we did!  They are very handsome.  I'll try to get a photo of them for you to see. 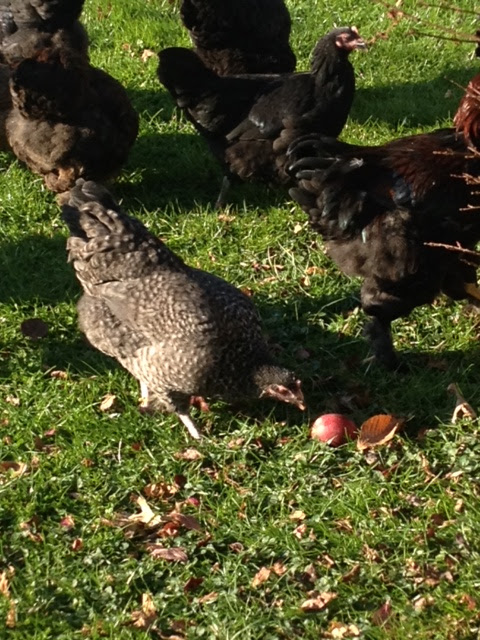 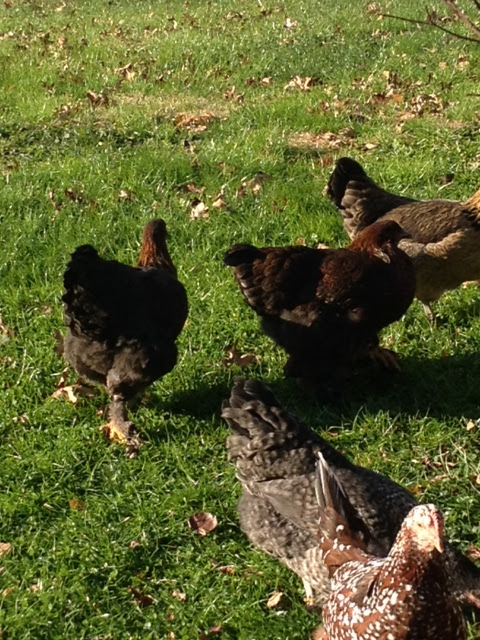 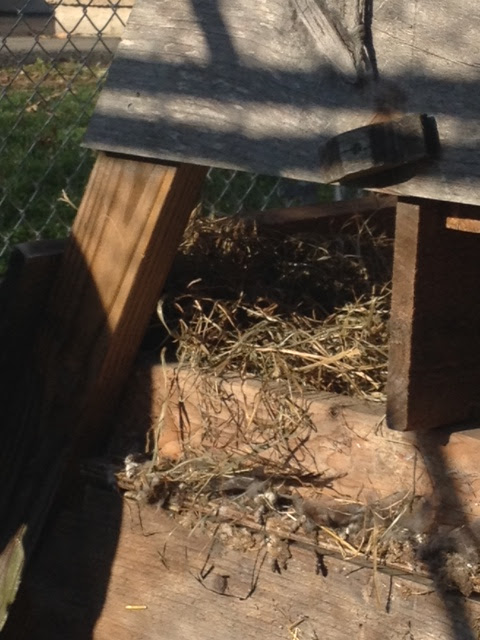 Lindsay came by after her part time job working at a horse barn, to clean the coop and the run. 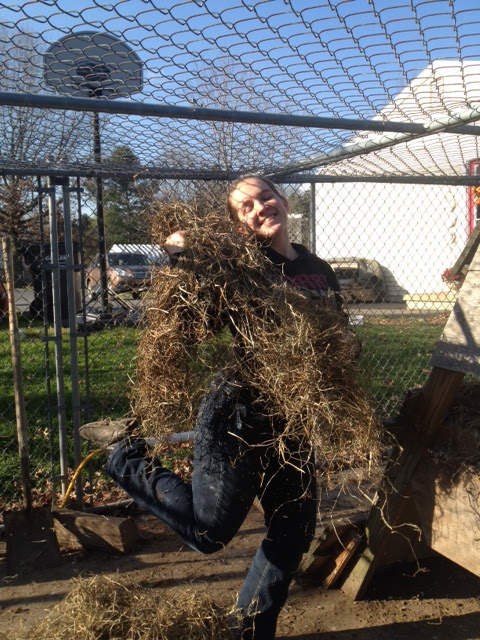 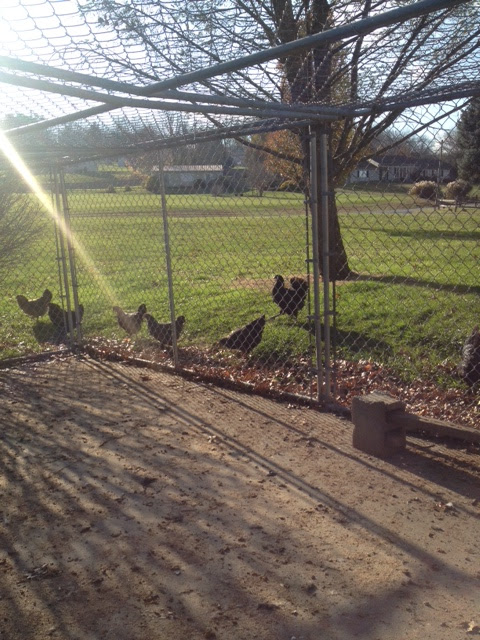 Later I took Rachel to work.  I was gifted with a beautiful sunset on the drive home! 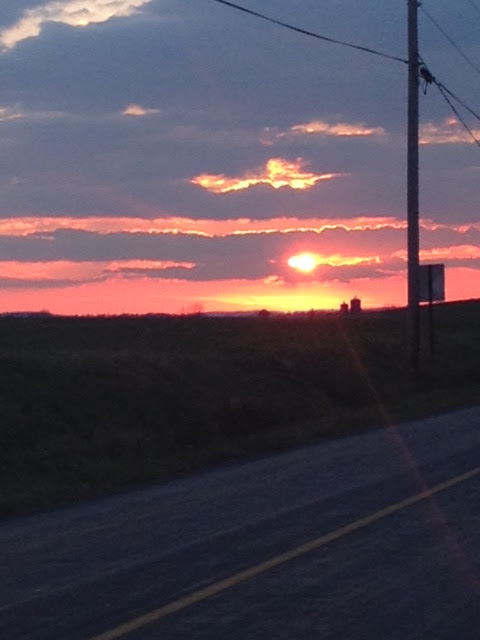 I drive a lot of backroads, with very few cars on them so it is easy to just pull to a stop and snap a photo.  Yesterday, cars kept coming behind me so I had a harder time.  I did manage shots from several different roads, as the sun moved lower and sank beneath the horizon. 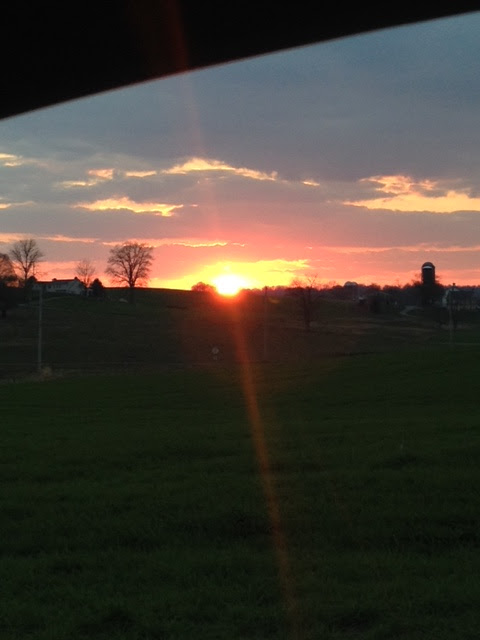 I hope you have a wonderful Thanksgiving, American friends, and great rest of the week to the rest of you!

I am thankful for you all, and how you've enriched my life with your friendship!
at November 25, 2015 3 comments:

I Need To Talk About My Christmas Tea

This helps me think it all out and know what I still need to do.  We had to move the date from December 7th to November 30th, so I've lost a week to prepare but I think it'll be fine! 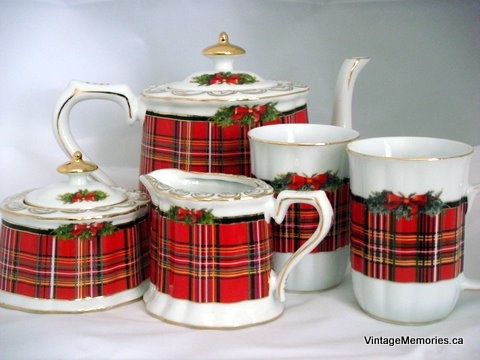 Photo from Pinterest. I'd love to own this tea set!


Well, the theme is set - Tea In The Highlands!  I'm going for a 'Downton Abbey' era vibe.  For Downton watchers, think the Christmas episode when they were visiting Robert's cousins Lord and Lady Flincher, and their daughter Rose.  It was a glorious visit - stag hunting, a piper playing them into supper, the Gillies ball.  The only horrible thing is that Julian Fellowes had Matthew die in that episode - but I digress.  Sigh.

There will be NO dying at my tea, I hope everyone got the memo on that!

Will the ladies dress up and be excited?  You never know.  Most will, and they will help make the tea a success.  I really wanted to surprise everyone with a real Piper to play 'Highland Cathedral' to start out our tea, but the one I contacted was out of the budget.  So sad!

This will get you stirred up for the day! You're welcome!

We are having a meal this time, along with our scones and desserts.

The menu consists of Poppy Seed Chicken and Green Beans, 3 types of scones, and many desserts.  I'll be making some low carb desserts and scones so that I can enjoy the tea, too!  I am toying with the idea of finding a recipe for Haggis and seeing if I can make it in parchment, since I have no sheep stomach, thankfully.  I don't know if I can convince anyone other than Lindsay to give it a try, so this is an item that will be on my 'things to cut out' list if I am pressed for time.

I'm going to decorate the tables in tartans, greenery, and candles.  I'd like to find inexpensive stags to have with the centerpieces, as the stag is the 'Monarch of the Glen', but so far I haven't found what I have in my mind.

I'm going to make shortbread cookies in the shape of Scotty Dogs and tie a wee plaid ribbon around their necks, and this will be at every place as a take home gift from me to them.

For tea we'll have a variety of flavors but I always make my Christmas Tea because people love it!

Here is the recipe -

Add either just cinnamon, or you can add clove as well,  to taste.

We love this tea and make it every year!  If you make it you'll get rave reviews!

We are also playing an ornament game.  Everyone brings an ornament, and we'll take turns picking one to take home!  Ah, but the next person to choose can take the one you chose away from you!  Ah, Rats!  You have to choose again, and can take it back!  See what fun that'll be?

Well, I need to go now and get some real work done around here.  Thanks for listening and letting me talk it through.  What do you think?  Would you subject yourself to a tea like this?  Let me know! 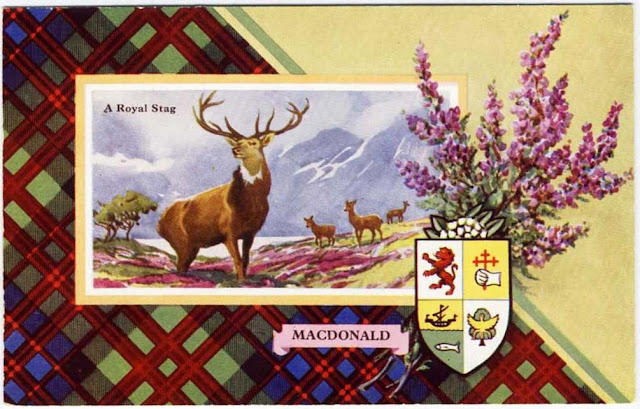 Today we are going to taste cake!

When Lindsay was getting married, she contacted bakeries for pricing so we could have an idea of what we were looking at, cost wise.  Some used voicemail and we were surprised that a few never returned her call.  We assumed they didn't need our business, so we didn't bother to call again.

What we did was we found a wonderful baker who's rate was $3.50 a slice and then got a cake that could feed 100 people.  What about the other 125 guests we had at Lindsay and Joseph's wedding?  Did they go cakeless?

Nope.  We bought delicious sheet cakes from Costco in several flavors and served that.  We are budget conscience around here and taste conscience!  The Costco cakes are great, and in fact when Nate and Kay got married, we just did a Costco cake for them, as she is not a big cake person anyway. Here's a photo of it. 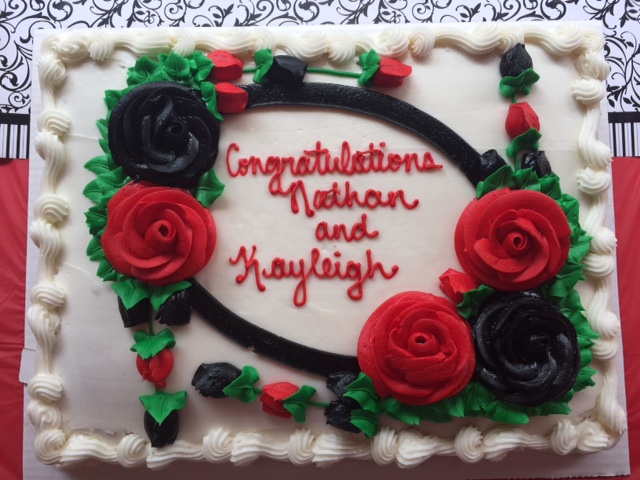 For Emma's wedding she wants a tiered cake so we're going back to the baker we found for Lindsay's wedding.  It will be small, she wants to be able to save her top layer for their first anniversary, and have some to cut for the wedding, but she doesn't want a big cake.  We are looking for small and special.

Then we'll get a sheet cake or two from Costco in her wedding colors and that will be plenty of cake. 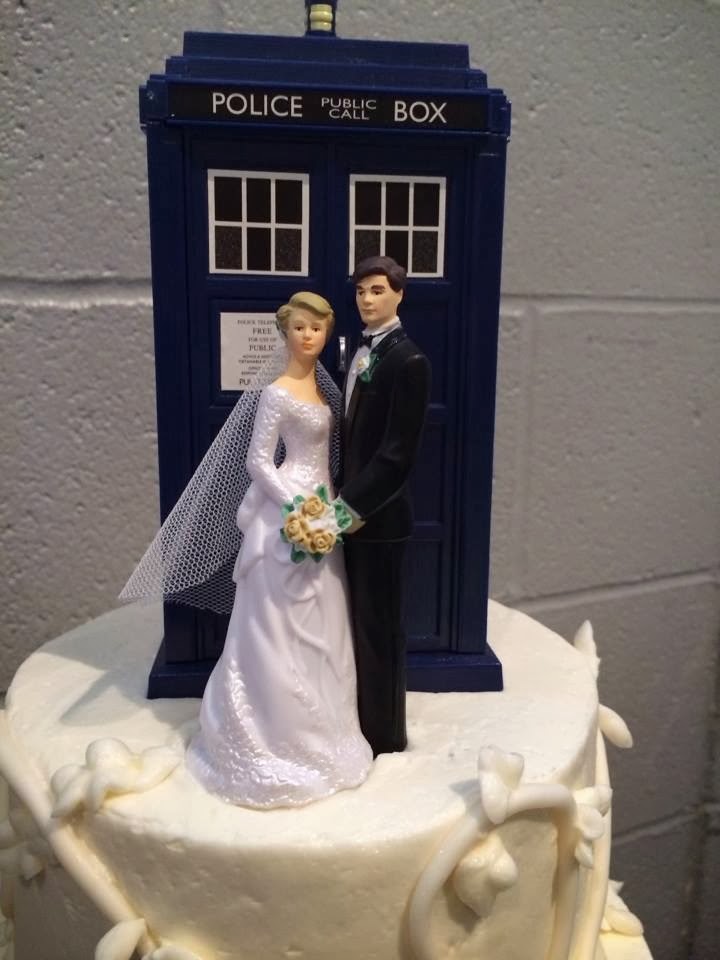 Lindsay and Joseph's wedding cake!  The topper is so them!

We went to the movies yesterday and enjoyed it very much.  Since we went on a school day, in the morning no less, we very nearly had the place to ourselves.

The theater has big reclining seats, I was so comfortable!  The movie was really good, and we've been enjoying talking about it and it's themes and characters.

Today, I am hoping to get my desk cleared, and to get to some hemming of pants that have, embarrassingly, put off for too long now.

I'm still knitting hats.  I'm working with a lovely green right now.  I'm also finding time to read a series of books that Kati  got me started on when she gifted me with the first two books!  It's The Scottish Crown series by Carol Umberger.  I'm on book three now and Sarah has finished them all!

I also plan to do a bit of baking, trying out some new THM recipes.

Tim is taking Sarah, and going to help his friend Caleb begin to move.  The big furniture will be moved on Tuesday, but tomorrow they are moving all the other stuff!  Tim likes to take the kids along to learn to help and serve others.  He's going to treat her to breakfast.

What are you doing today? 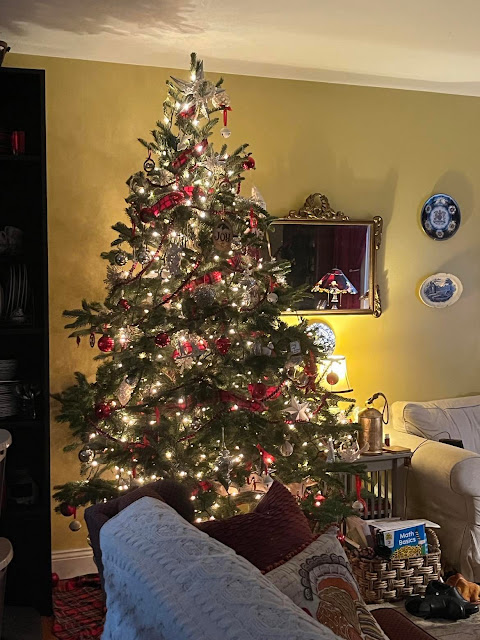